Best Job in the World

I awake every morning to what must be the best job in the world, looking after the bees. Spending time alone for some might not be the ideal way to spend the day, but I love it. Of course I sometimes get to talk to land owners and farmers during the day as well as customers wanting nucs or queens, but if I don’t see anybody all day then the wife gets all the news in one go when I get home !!

Queen rearing has been a different challenge this year as I had a slight left eye problem making grafting a hit and miss. I decided to use the Nicot system which had been sitting on the shelf in the bee unit for the past two years. This box holds one hundred and ten little brown cups for the queen to lay in. I was only expecting the queen to lay twenty or thirty eggs if that, as I was still not convinced the method would work. Having never used one before I was a bit sceptical but I needed queens, and lots of them. I like to re-queen about fifty percent of the hives each year, which meant that about one hundred queens were needed, plus queens for making nucs for customers as well as making new colonies for expanding the business.

The Nicot frame is placed into the breeder queens hive the day before to get the bees to clean the cells. Twenty four hours later I placed the queen into the cage and hoped for the best. The next day I took a look and there was nothing doing, so I thought give it another day and if nothing then I would try to graft larvae and hope for the best. Another twenty four hours and to my surprise nearly all of the cells had eggs in. I released the queen and came back three days later.

It’s no good placing the cell cups with just eggs onto the cell bars as it just would not work. So after the three days I went back and placed the now larvae onto the cell bar holder. Twenty cups placed onto the bar and given to a starter colony, and the following day I gave them twenty more after moving the first bar into a finisher hive. I estimated that I could have used about sixty to seventy of the cups, but at the time I had not set up any more starter or finisher hives. 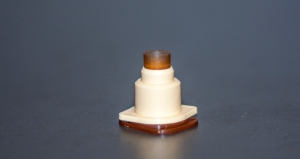 The result was that I had eighteen takes on the first bar and nineteen on the second. I have since made up some more starter and finisher colonies and have used the Nicot many times. I still prefer grafting and hopefully next season I will be back to the grafting tool, but this has been a worthwhile exercise and definitely a good backup system,  so much so that I now have two on the go.